For the April, 2018 meeting of the Board of Trustees, our Director wrote this short summary of major library events in recent years, as context for understanding the current state of the library.

Following the recent tax proposal vote and considering the need to make a Strategic Plan to navigate the new funding paradigm, I need to give context for our current situation.  To really appreciate where the library is now, we must understand where it was 4 years ago.

2014 – In early 2014, the previous Director, Joan Henderson, retired.  I began my tenure as Director on July 1 of 2014. As of that time, the library was at a financial nadir, having seen tax monies reduce year over year since 2010.  There was one full time employee, the Director, and a dozen part-time employees, as other full time positions had been cut, along with library hours, healthcare benefits, and most programming.  As I noted to the Board that fall, the library had become what we in the profession call a “book warehouse,” meaning the library had been forced to reduce operations to book-related work, and not much more.  I also maintain that my predecessor did a phenomenal job keeping the library going given the financial constraints she was working under, right down to doing things like keeping the computers functioning with duct-tape and wire.  She and the Board made a lot of hard decisions to keep the doors open.

As with so much in Ferguson, many things changed in August of 2014.  Within the wider context of “the Ferguson Story,” our library became famous and was pitched as a sort of countermelody in the Ferguson song, a reminder that this is a real and vibrant community, that the people of Ferguson can and will come together for a common cause, and that we persevere.  The library received extensive media coverage for conducting an ad-hoc school during a week that the Ferguson-Florissant School District had to delay the start of the school year, for staying open when others were closed, and for doing lots and lots of programs throughout the fall. During this period, the Board supported my efforts to seize opportunities to put the library’s mission at the forefront, and my determination to do more.  We received significant attention again in November of 2014, when we responded to the grand jury announcement by being open as much as we could (i.e. when it was safe to do so) and doing all we could while open. This resulted in massive donations from around the country and around the world, totaling around $450,000. The Board then organized this money into the Donation Allocation Plan, a 5 year plan to use most of the money to promote programming, perform long-overdue maintenance, and make the library more inviting and responsive.  We also created an investment plan for the money. Overall, in 2014, we took a number of considered risks, and leaned hard into our mission and into a focus on helping the community. These risks were greatly rewarded.

2015 – We began the process of becoming a different kind of library.  We hired our second librarian, a Children’s Services and Programming Librarian.  We combined part time jobs into full time positions, which greatly improved customer service and consistency across shifts.  We pursued a few big programs like Storycorps and Readings on Race Book Club, and otherwise set a new normal for programming that saw ongoing programs from month to month, as well as one-shot programs each month.  Collection development began a steady improvement in quality. Following the Board’s plan and seizing opportunities as they came, we replaced carpet, upgraded and expanded all computers, upgraded AV capability of the auditorium, got handicapped-accessible doors, upgraded the security system, replaced old HVAC units, replaced furniture for computers, and changed a number of policies to make the library more inviting and responsive to the community.

We also changed the library world.  We received the highest honor a library can get, Library of the Year.  I also received the Lemony Snicket award. The library and I received other awards from various organizations, like the Missouri Library Association, as well.  The wider library world began rethinking how libraries respond to crisis, and the Ferguson Municipal Public Library District became a regular part of that conversation.  What we had done was not unusual, but the boldness with which we had done it, and the media focusing on our work, shifted how library schools, professional organizations, and individual librarians talked about crisis response.  We took steps to maximize gain on this moment of fame, like securing a grant to replace all our computers, pursuing a massive technology donation from Hewlett Packard, and to improving relations vis-a-vis St. Louis County Library.  I was asked to share the library’s story and so served as keynote speaker for a number of state library organizations and some overseas organizations starting in 2015 and lasting until early 2018. I think 2015 was the height of our fame as a library.

2016 – We continued the process of improving our responsiveness and customer service.  We combined more positions and pushed toward more professional expectations for full-time employees, and made a number of good hires for part-time employees.  Our current complement of 4 full-time employees and a dozen or so part-time employees was achieved over this year. Collection development greatly improved. Programming pushed out further into the community with things like doing storytimes in classrooms and having a presence at public gatherings.  The Board updated the bulk of our policies to reflect and set the new paradigm of responsiveness and community focus, and allowing flexibility to adapt to needs. Following some careful decisions from the Board, we remodeled the bathrooms. We also expanded the security system again and replaced the back door, along with the usual year-to-year maintenance of things like the parking lot and the roof.  We felt the limitations of budget against what we wanted to accomplish, in the form of limited staff bandwidth and limited meeting space, and plans not quite realized. The Board began discussions in earnest about the possibility of asking Ferguson citizens for a tax rate increase. None of our successes this year came easily.

In the wider library world, the Ferguson Municipal Public Library District began appearing in textbooks and course curriculums in library schools.  We were widely perceived as having followed success with success and touted as examples of not just handling a crisis well, but setting expectations for being responsive to the community and promoting community to the wider world (currently, in 2018, we are praised more often for supporting our community than for handling crisis).  I continued getting calls or emails from librarians whenever a crisis would happen across the country. I joined with other librarians to start wider efforts to support libraries in crisis, as well as to promote intellectual freedom through my position on the Board of the American Library Association’s Intellectual Freedom Round Table.

2017 – We settled into the new staffing paradigm.  Collection development continued to improve and the stacks themselves became more organized and approachable.  With the Board’s blessing, we replaced a portion of our library shelving, replaced most of the public-facing furniture, and replaced another HVAC unit.  We conducted our first and second fundraising attempts with the list of donors from 2014 in late 2016 and 2017. The Board commissioned a community survey.  After some contentious discussions, the Board authorized an educational campaign to make the people of Ferguson more aware of what the library has to offer. Throughout this time, the Board continued considering the possibility of a tax increase, adjusting and adapting to new information.  The Board decided, in November, to put a measure on the April 3, 2018, ballot. Key staff members and Board members became especially active at the end of the year and through early 2018 as we put together the A/B plan and public-facing documents to inform the community. Also, our improved relations with St. Louis County Library during my new position as President of the Municipal Library Consortium, led to removing reciprocity payments among library systems.

In the wider library world, the Ferguson Municipal Public Library District’s reputation remained very strong.  What we did that was bold and exciting in 2014 and 2015 is now normal in libraryland. We received much praise and thanks from our 2014 donors and from librarians on social media.  We settled into a “new normal” of being highly respected within the profession and viewed fondly across the country.

2018 and current status – On April 3, the people of Ferguson voted to increase the library’s tax rate by 18 cents per $100 valuation.  Sixty-six percent of voters approved the measure, which is a resounding endorsement for the library. It is a sign that the library is appreciated and trusted locally as well as nationally.  The 2018-2019 budget is around 34% higher than the 2017-2018 budget, but significantly larger if compared to what it might have been without the tax increase.

We face challenges in retaining the strong staff we have now, in being able to attract strong staff, in making the most of the new funds while being absolutely responsible in our administration of the people’s money, in continuing incremental improvements to the physical library, in finding new community-facing ways to serve our people, in finding ways to learn more about our people, in realizing our plans despite the constraint of the building we have, and in not squandering our opportunities.  We also face the high expectations of the community, expectations we have set by the library doing good work in recent years, but also expectations which may, post-vote, regard us as being better funded than we really are.

Key staff members are currently making plans for the Board to consider, regarding what that means for the future of the library.  I believe we need to further increase the expectations we have for our full-time staff, further professionalizing the positions and providing appropriate compensation.  We need to add a new full time position that is community-facing, handling adult programming, marketing, and economic support. We also should increase materials funding, and continue the work of the Board’s Strategic Planning Committee.  The general direction of these efforts moves us deeper into the mission, while keeping in mind that the core of what a library does is to help people, face-to-face and moment-to-moment. I call on the Board to validate this vision and seize our opportunity to prove ourselves to our community.

We are not the same library that we were five years ago.  Every aspect of operations has been improved. We do far more now, and have more successes to point to.  The library is much more attractive and welcoming. Many in Ferguson consider us a vital community asset.  We may well be the most famous library in the country, though there is no way to measure such a thing with certainty.  The last few years have not been easy. The Board and staff have had difficult decisions to make and tough situations to navigate.  But the risks have been rewarded, the work has yielded great results, and we are in a stronger position than I would have thought possible on the day I started my tenure.  Frankly, it is hard for me to imagine this library being in a better position, considering what we faced before 2014, and during 2014, and since. 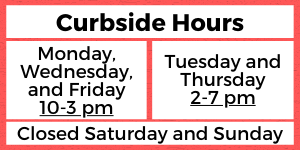 Check our our Research tab!

OverDrive for ebooks and audiobooks.

TumbleBooks for children's books, including read-aloud books, videos, and games.